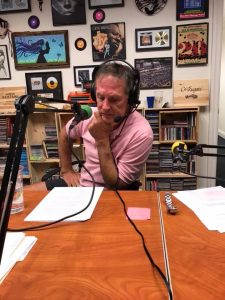 Host Richard Bonte at work on “Curmudgeonly Yours,” his show (named after his latest novel, “Curmudgeonly Yours”) on Society Bytes Radio, an Internet Radio station in Sarasota, Florida “providing music and commentary for the mind and soul.”  Richard has a weekly program interviewing top-notch guests from all walks of life and in English, French or Italian.  Airing during the first four weeks of October, the shows will be:

In November, there will be two shows (in French) on Louis XVI’s accountant, lawyer, and counselor, Chrétien-Guillaume de Lamoignon de Malesherbes, with guest and author of historical French fiction, Luc Rentmeesters; one show with Robert Vodnoy, Music Director of the Chamber Orchestra of Sarasota and one show with Jo Morello, award-winning playwright and author of the new play with music, ‘Lil and Louis.’  All shows are half an hour long.